Community Center “Svetlina-1927” at the village of Davidovo was founded in 1927. Since then, the community center enjoys respect from the local community and recognition as a community-building place, which supports the cultural and spiritual enrichment and development of the villagers. 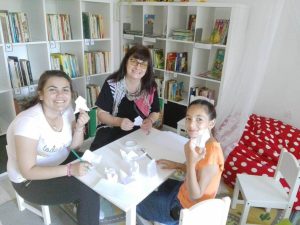 The Community Center was the first in Targovishte district, in which the program “Element of Play” was applied. It has been implemented under the project “Mobile approach to the Toys Library” in the period 2014-2015. Since its completion at the Community Center the project “Traveling library Toys and music in action” started. Weekly activities with children and families by specialists of the Club of Non-Profit Organizations with funding from the WWO are being implemented until now.

In 2017, within the framework of the project, the children’s department of the library at the Community Center was completely renovated and furnished, entirely with funds from the donors of the WWO at a total value of BGN 10,294.

The project aims to provide children from rural areas with more opportunities and access to play, toys, activities in support of their development, social skills, and in their preparation for entering kindergarten or school.

The experience from implementing programs based on play and support for early childhood development in rural areas, as well as the raised parents’ and children’s engagement in the Community Center, has led to the recognition of these good practices in the district of Targovishte. This model started to be applied in 2020 in two more community centers in the district, as well as in community centers in Lukovit municipality and Oryahovo municipality.

We present Mariana Koleva, the specialist from the Community Center, who is directly involved in the implementation of the programs. She has been the Community Center’s secretary since 1992 and participated weekly in play sessions with children and mothers from the village. She actively supports the work of the specialists who lead the sessions from the Club of Non-profit Organisations – Targovishte with logistics.

We are convinced now that play is the tool that can best help children develop their abilities and skills. By playing, we support the development of their skills in language comprehension and expression, their ability to follow rules, make friends, be proactive, etc. These gatherings are beneficial not only to children but also to parents since we support them to improve their parenting skills and teach them how to help and how to support their children to be more successful in life. The program about learning and playing receives great interest from children and mothers and everyone in the village because they see that it is very useful for everyone.

Here is a story of a child told by Mariana:

„The girl I will tell you about is called G. and today she is almost 6 years old. When she started attending the sessions in the community center she was about 2 years old. In the beginning, she was only attached to her mother, playing only with the toys her mother offered her, and not making any contact with the other children at all. This mother and her daughter often sat alone near the entrance of the playroom, not talking to others, occupied with each other, remaining almost invisible. The mother also did not make any contact with the people from the community center’s team. She was shy and reserved. Gradually we began to get to know each other. I found out that she takes care of the children and the house by herself and that her husband works abroad and helps them with money from there. One day she shared that she is worried that G. is already three years old and does not talk to other people outside the family. At the same time when she was playing, if we tried to include her in a conversation, the mother answered instead of the girl. The woman was also worried about how her daughter will cope in kindergarten by not talking to other children and adults. All this made the mother shut herself in, grieve, and keep everyone around her away.

However, the two of them did not miss a session in the community center and were always among the first to arrive for games, music, or reading fairy tales. Everyone on our team started paying more attention to G. and her mother. The child did not leave her mother for a second and did not participate in group games, so we started offering them games in a small group. For example, to roll a ball with another of the children in the group or to draw in a group of three and gradually we raised the small group number to four. At first, G. did not want to play like that, but in a short period she accepted and this started something new – she began to take it for granted that there was someone else besides her mother with whom to be in contact and play. Gradually, she became used to the structure of the sessions and the steps we followed each time, made her feel calmer and more able to stay calm while being away from her mother. She began to speak spontaneously, to not be ashamed, and also began to laugh more often and to take initiative.

In the autumn of 2019, G. went to a kindergarten in a neighboring village. She was then able to say goodbye to her mother in the morning and spend the day outside her family, as well as communicate with other children, understand the language spoken by teachers, and play. One day her mother told me that she was grateful to me and the other girls for coming with G. here to the community center and that her little girl now knows a lot “… she knows the colors, and how to count and know and put the toys in order, and teachers from the kindergarten compliment her”.

Something else happened during those years as well! G.’s mother also built friendships with other mothers and with us. She began to advise, trust, learn, and have a better understanding of her children and how to support them in their development. G.’s mother, as well as the other mothers attending the children’s play sessions in the community center, have dreams for their children – to grow up smart, educated, happy and find their place and realization in life, to escape from the circle of poverty in which their parents live. That is why they are bringing them regularly to “study” with us in the community center.

There are many more stories like that. They make me feel helpful with my work and to be proud that the community center in the village of Davidovo created the path for this extremely useful model of working in communities where there are no other services for young children.”